The business of being Indiana’s First Lady has Karen (Batton) Pence, Bishop Chatard High School Class of 1975, wearing a variety of hats. Now, as she supports her husband, Governor Mike Pence, in his run for vice president of the United States, the demands on her time will, undoubtedly, continue to grow. Karen keeps life in balance by applying the advice she gives to others: Find a job that fits with your gifts and your passion, and you will honor God and be happy. The mother of three spent 25 years as an art teacher in Indiana and Washington, D.C., before trading her art supplies for, among other things, historical dress that she often dons when visiting classrooms across the state as the official ambassador for Indiana’s Bicentennial Commission. In her role as First Lady, Karen is involved in a variety of diverse programs including serving as the honorary chair of the Art Therapy Initiative at Riley Children’s Hospital and as a member of the Riley Children’s Foundation board. As the wife of Donald Trump’s running mate, Karen recognizes that her schedule may feel the impact of the presidential campaign, but she said that serving Indiana remains her priority. 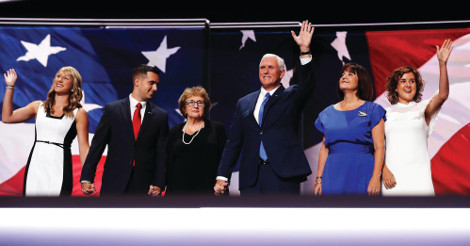