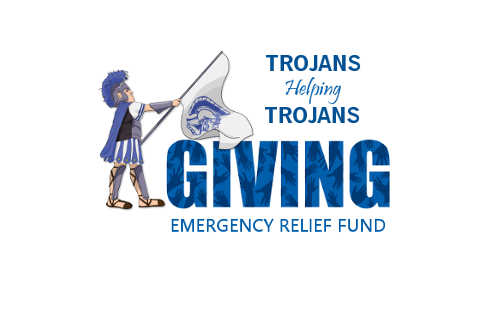 This emergency fund effort is has transitioned to our Annual Fund Drive campaign. View information about donating to BCHS

BCHS grads live on in the football world. Here is a list of players still on the field, whether in Pro or College football, in the Fall 2019. (If we’ve missed anyone, please contact Vince Lorenzano at vlorenzano@bishopchatard.org) Pro Football College Football

Bishop Chatard invites all football alumni who played on one of the school’s 13 state championship teams to be our guests on Friday, September 6, 2019, as the BCHS Trojans take on the Roncalli Rebels under the lights at BCHS.

Game time is 7:00 p.m. Check in at the entrance table in the north end zone and enjoy a casual catered dinner under the tent before or during the game.

Watch the game from the north end zone area or sit in the bleachers. You will be given a button at the time you check in that will allow you to move between the tent area and the bleachers.

Please RSVP by August 30 to Margaret Ruffing at mruffing@bishopchatard.org and include your year of championship. We would like to recognize the teams at half time.

We look forward to seeing you under the tent! Go Trojans!

Calling all alumni who are interested in sharing your profession with current BCHS students! We are seeking alumni volunteers for our ‘Alumni Career Lunch’ program, to present your career story during lunch periods to current students who have signed up to attend your presentation.

You would be making 3 of the same 15-20 minute presentations to the students during student lunch period (11:30-1:00 p.m.). Presentation details could include your college choice, why you chose your career, details of your career and how BCHS prepared you for your future. Lunch will be served to you and the students. Careers we are seeking are: Architecture, Business, Computer Science, Engineering, Journalism, Law, Math, Psychology, Physical Therapy, Sports Management and Video Game Design. If you have a different career you’d like to share, please let us know.

We are also seeking young alumni (2008-2013) who would like to discuss their college and career choices with prospective families at Open House. View Open House Details

Join the Bishop Chatard community in August when we will host our first varsity football games in the Bishop Chatard stadium! And, we’ll honor our alumni and celebrate Trojan style with special events and giveaways throughout the season. The 2018 Trojan Varsity Home Games will be:

BCHS Alumni Director Robin Kontor was excited to head to Western Kentucky University in Bowling Green to visit BCHS alumni attending the university. And, she also presented them with BCHS Cafeteria cookies, as she begins the first stop in the new’BCHS COOKIE TOUR’, starting just this year! Robin was happy to talk with the following alumni who are students there:
Not pictured, but visited were: 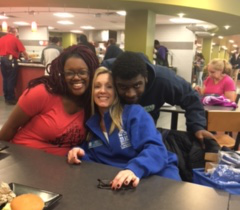 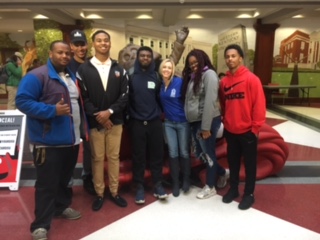 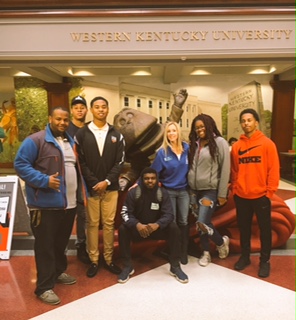 BCHS Cookies make their way to our alumni in the service

BCHS Alumni currently on active duty serving our country in the military are in for a Veteran’s Day surprise. The BCHS Alumni Department recently sent a package of the famous Bishop Chatard cafeteria cookies to all active military addresses we have on file, as a thank you for their service to the country and the world. We hope this little bit of home will bring back great memories to our veterans whereever they are!

Denise Morrow, BCHS Class of 1992, earned her bachelor’s in elementary education from Marian University and is presently working on her master’s in curriculum and education at Western Governors University. Denise taught 1st grade for 9 years, kindergarten: 1 year, preschool: 1 year and is presently a 2nd grade teacher. She also keeps busy outside of school. She is a member of St.Rita’s Church where she sings in the choir. She is also a member of the Indianapolis Philharmonic Gospel Choir. She received her 25 year pin as a member of the Knights & Ladies of St. Peter Claver, Christ the King Court #97. Thank you so much Denise, for sharing your accomplishments and interests!

Congratulations to Sara (Perry) Bye, BCHS Class of 2009! She writes to tell us she recently married Andrew Bye. They are expecting their first child in March. The family resides in Bluffton.